Anyone who signed up to a fixed-price tariff 12 to 18 months ago is in the same boat. Photograph: Christopher Thomond for the Guardian

Thousands of households are being hit with 40%-plus increases to their gas and electricity bills – far above the price hikes announced by the big energy firms in recent months. A combination of sneaky changes to billing structures, regional variations and the fact that many popular fixed-price tariffs have come to an end have left furious Guardian Money readers complaining that their bills are set to rise by £300 to £400 a year, contrary to official price rise figures from the major providers.

Most big suppliers (and a number of smaller rivals) announced standard tariff increases of 8% to 15%, with many coming into effect in recent weeks.

But reader Diane Gaunt from Oldham was told by Scottish Power that her monthly payments would be rising by 24% – dwarfing the 7.7% claimed price hike. Like thousands of others her increase was inflated by the fact that she was coming off a fixed deal, though others are much worse off. Data seen by Guardian Money shows energy bills have risen by as much as 60% for thousands of households.

Customers who were on nPower’s Collective Price Fix March 2017 tariff were paying £742 on average. Since the deal ended on 31 March, that same group will pay £1,187 a year on the firm’s standard tariff – a 60% increase. Those on the Co-op Online March 2017 deal are now paying 50% more – unless they have moved to a cheaper tariff or switched supplier. Experts say anyone who signed up to a fixed-price tariff 12 to 18 months ago is in the same boat – see table below.

“It would seem that I am being penalised for being an existing customer. An increase of 7.7% is too much, but almost 24% is quite frankly a rip-off, and I can only assume you have made a mistake. You have certainly made a mistake if you imagine that I will pay it,” said Gaunt in a letter to Scottish Power.

David Atfield from London is facing a 38% hike to his electricity bill. The pensioner, whose annual electricity consumption is about a third of the national average, has been hit by a rise in nPower’s standing charge – the flat daily charge users pay to receive the supply.

His bill is rising by about £100 a year, though he can sidestep the increase by switching to Ebico’s Zero tariff that has no standing charge.

Another reader – RH from Yorkshire – recently contacted Money to say his bills are about to rise by over 40%. The former GB Energy customer is one of 160,000 moved en mass to Co-operatve Energy after GB Energy collapsed last November and complains that his bill increase dwarfs the claimed figures.

Mark Todd, who runs Energyhelpline.com, says the energy price rises reported in the press are not necessarily the price rise that individual households face.

“For example, low-usage, electricity-only nPower customers are being hit by 22% price rises, not the 15% average electricity price rise or the 9.8% dual fuel price rise being publicised.

Customers coming off cheap fixed-price tariffs can be in for a huge double whammy. A price rise coming off their cheap tariff then another as they land on a higher standard tariff. The most unlucky customers are getting whacked for 60%. With energy it really pays to shop around once a year for a good deal. It’s the easiest big bill to switch and typical savings are in the region of £200 to £300 a year. Not a bad return for around 10 minutes’ work,” he says.

In March Theresa May said her government was preparing to intervene in Britain’s energy market to weaken the influence of the big six providers and to stop the poorest families being forced on to the most expensive tariffs. Experts had expected a move on Monday, but the calling of the general election means that it will have to be part of the Conservative election manifesto instead.

On Wednesday the business secretary, Greg Clark, said the government’s response would be “muscular and strong, and it will apply to all the companies”. 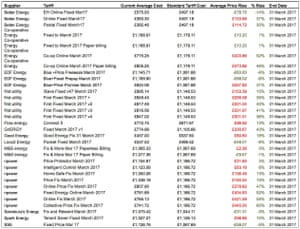 Most of the big energy suppliers announced standard tariff increases of 8% to 15%. Photograph: Energyhelpline.com