Recycling, solar panel installation and ‘walk to school weeks’ are among the initiatives being led by students. Photograph: Alamy

At the Manchester Creative and Media Academy, six year 10 students have just done an environmental audit of their school. They conducted interviews with staff and other pupils, inspected what was already being done, and examined energy policies. From this they have planned campaigns on recycling and litter – with specific targets – to make their school greener, all while studying for their GCSEs.

The academy is part of the Green Schools Project, a student-led programme that helps schools become more environmentally friendly. It provides guides, presentations and resources so that coordinators within schools can recruit students to set up successful and results-driven green projects.

Rachel Pickering, a geography teacher and coordinator of the project at the Manchester school, says the scheme has helped her students develop a professional approach to making change. “After the audit, they were able to come up with a list of priorities to focus on and presented this to the senior leadership team,” she says.

“For the girls, staying after school to present to staff was a big deal so it’s been really great. They know they’ll be able to put it on their sixth form college applications – it’s good they have taken ownership of a project. They are really determined to make it a success.”

The Green Schools Project is the brainchild of Henry Greenwood, who headed the maths department at a secondary school in east London until the summer of 2015. After 12 years of teaching, he joined the legions of start-up entrepreneurs in the capital, launching his social enterprise in September of that year.

The idea began during his previous role at Kingsmead School in north London. “I was frustrated by what I saw around me; lights left on, windows open with the heating on in winter, recycling boxes not being emptied and litter everywhere. There was just a lack of awareness among the students about environmental issues. It was covered a little bit in geography and science, but they didn’t really see the practical applications of how you involve it in everyday life.”

Greenwood created a new role for himself as sustainability coordinator at Kingsmead. Using the Eco-Schools framework – which awards schools at different levels depending on how green they are – as a starting point, he recruited a group of students to start their own initiatives. 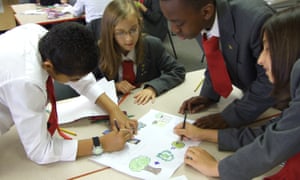 “I knew it couldn’t just be me; it had to revolve around the students,” he says. “I helped them to lead the project but they came up with ideas of what they wanted to do around the school, and went into assemblies and gave presentations. It worked really well and they got a lot out of it.”

The club was a success. Over a three-year period, the student’s energy-saving campaign saved £35,000 and got the whole school recycling. They installed solar panels, started a vegetable garden, held ‘walk to school weeks’, and before long had landed the highest Eco-Schools accolade – the Green Flag.

Now more than 20 schools are signed up and actively running green clubs using the model devised at Kingsmead. Greenwood has been joined by Morgan Phillips, the former head of Eco-Schools England, as associate director, as well as an enthusiastic advisory board.

Sustainability is one side of it. The other is the soft skills such as communication and building confidence

For teachers at Northumberland Park Community School in Tottenham, the project was attractive for the transferable skills it offered students. “Sustainability is obviously one side of it. The other side is the soft skills such as communication and building confidence,” says Tom Parkin, a science teacher at the school.

Students from Northumberland Park recently took part in a debate about what Brexit means for the environment, alongside MPs and experts in the field. “The students got so excited and really planned out what they wanted to say,” says Henry Finn, a science teacher who co-runs the school’s green club. “One of them spoke about a polystyrene cup campaign that they have been running. It was an amazing chance for them to practise public speaking and leadership skills.” 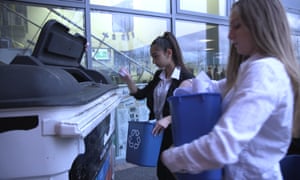 There are also ways to get younger age groups involved. Year 6 pupils at Orchard Primary School in Hackney are once such example. “All of the planning comes directly from the children so they have ownership of what they want to change and how,” says teacher Claire Lee. “It’s great to see their pride when their initiatives are successful. For example, they ran a competition during switch off fortnight to see which class could save the most electricity and they have organised workshops to teach their peers how to create recycled crafts.”

This month, the government launched a new litter strategy, which identified the Eco-Schools award as a key mechanism to educate children and young people about the impact of litter. While such recognition is welcome, some campaigners and educators would like the government to go a step further and make environmental issues something on which schools are inspected by Ofsted.

History teacher Phil Bell runs the Green Schools Project at Alec Reed Academy in west London, and believes there should be an “inter-disciplinary approach to environmental issues”. He explains: “Students just don’t have the environmental literacy to discuss [green issues] in a meaningful way, which hinders them from developing a real interest. In English, for example, they should be reading poems about green issues. In history, the environment should be part the curriculum. There’s a gap in schools compared with the importance of global warming as an issue.”

Getting schools to think green has been a challenge, Greenwood admits, despite the financial incentives energy saving can bring to cash-strapped schools. “Schools are just not looking in that direction, there are so many other pressures so it’s not a priority,” Greenwood explains.

“Focusing on long-term savings when you have immediate budget problems is part of it, but schools are also just looking at academic results and Ofsted. I don’t think it should be an either/or, as this can help those things given how much the students gain from it.”

Despite the challenges of operating in the current climate, the Green Schools project is growing and the resources have recently been adapted for a pilot in three primary schools.

Greenwood believes the scheme will keep building. “I do sometimes feel like I’m pushing a ball uphill, but maybe we’ll get to a tipping point. There are enough teachers out there who care about this stuff – and definitely enough students willing to take on these projects.”